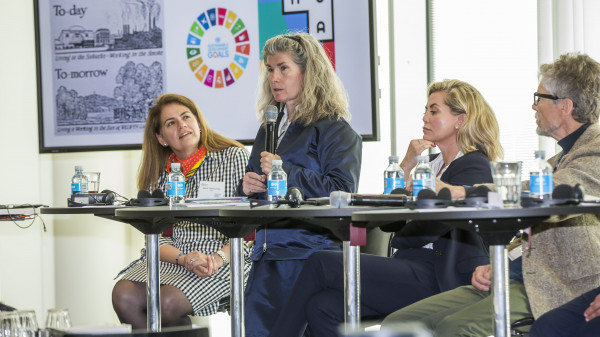 As part of the workshop Urban Workshop: Learning from the Nordic Experience, held at the Confederation of Danish Industry on May 27th, 2019, IFHP Director of International Affairs, Regitze Marianne Hess, participated as one of five panel speakers invited to provide their input to the headline “Revitalize your city”. Other panellists included:

The panel spoke to a gathering of more than 25 participating Latin American & Caribbean mayors and high-ranking public officials, representing more than 15 different cities. Orchestrated by the Inter-American Development Bank, the Confederation of Danish Industry and the Nordic Development Fund, the day was organized as a workshop to involve participants in idea generation for concepts that can be adapted to local contexts and included two technical deep dives on transportation and city revitalization. The discussion on city revitalization was moderated by Maria Camila Uribe, Coordinator of the Inter-American Development Bank’s Cities Network, and took its departure in best practices for urban revitalization across innovative social, environmental and economic projects in Scandinavia and Latin American & Caribbean cities.

The Latin American & Caribbean mayors and city officials (representing Argentina, Barbados, Bolivia, Brazil, Chile, Colombia, Guyana, Honduras, Mexico, Paraguay, Peru and Trinidad & Tobago) represents a region of the world that has been experiencing the world’s most rapid pace of urbanization in recent years. With 81% of Latin American & Caribbean inhabitants currently living in cities, it is today the most urbanized region of the world and contributes to a share of 13% of the world’s total population living in cities.

However, many Latin American & Caribbean cities face a wide variety of challenges. Approximately one out of five households in the region do not have access to proper housing, as many living areas suffer from inadequate living conditions due to issues like overcrowding and deficiencies in roofing, drainage and other basic services. With regards to infrastructure and mobility, the availability and affordability of public urban transportation needs to increase, as the ratio of population to vehicles has grown by 20% in the region, compared to 3% in OECD countries, from 2008-2013, leading to problems of congestion, inefficiency and disentanglement across national regions.

The past and future revitalization of Copenhagen

Considering these challenges, the deep dive on city revitalization sought to identify innovative social, financial and infrastructural models that have been developed in Scandinavia, to be used by Latin American & Caribbean public officials in fostering economically, socially and environmentally sustainable growth. Based on this departure, Regitze’s key points were rooted in the heritage of IFHP in utilizing interdisciplinary practices towards creating better cities. In the early days after the IFHPs inauguration in 1913, the IFHP advocated under the banner of the Garden City Movement for urban development based on the principles of green, clean, affordable and community-building.

Above: From garden cities to social cities, the IFHP has had a sustainability approach since its inauguration.

And while the delegation was in Copenhagen to learn about Nordic approaches to urban sustainability, IFHP has a legacy and outreach extending far beyond that. IFHP has long been engaged with the Caribbean and Latin Americas. Just within the past decade IFHP has held or participated in numerous congresses and events:

Since its inauguration in 1913, the IFHP has been a speaker of the delivery of sustainable cities on an international basis, always portraying the need to think of housing, planning and development from an integrated, interdisciplinary perspective. Today, as we see the majority of urban growth take place in the developing world, and as approximately one billion urban residents live in overpopulated slums in order to live close to economic activity and jobs, the IFHP has taken a keen interest in advancing the need to take account of the social impact produced by urbanization.

This notion is inherent in the IFHP Social Cities Programme, as it encourages cities to take stock of how citizens perceive and experience the level of social sustainability across households, neighbourhoods and cities. Successful urban revitalization cannot ignore the social dimension, as problems of social inequality, disentanglement and segregation exacerbates issues that occasion the need for revitalization. The IFHP Social Cities Programme, then, was introduced as an innovative tool able to deal with the oft perceived inaccessibility and immeasurability of social factors, thereby providing grounds for including social sustainability concerns alongside economic and environmental concerns that so often take the foreground in policymaking and public debate.

Another example of how to ensure that social needs are included into city re-development plans, was contributed by Luise Noring, presenting her research on Copenhagen’s revitalization from the 1980s until today. In the 1980s, the city of Copenhagen was dealing with an unemployment rate at 17.5% and an annual budget deficit of 750 million euros. In 1995, the local government halted all social housing development because of an inability to bear costs.

In what has been dubbed “the Copenhagen Model”, IFHP’s current President of the Board, Jens Kramer Mikkelsen, had a key role in transforming the city, through innovative institutional, financial and planning practices, in his capacity as the Lord Mayor of Copenhagen from 1989 to 2004 and later as the CEO of Copenhagen City & Port Corporation. Through construction of the publicly owned, privately run company Ørestad Selskabet – later Copenhagen City & Port Corporation – the city of Copenhagen was able to successfully capture the value of re-claimed land not in use and re-zoned for residential and commercial use, to be used for infrastructure development. Four main principles in the Copenhagen re-development effort included:

Among its key features, the model took a citywide holistic approach to urban redevelopment as it leveraged and sold off assets in one area to finance investments in another. The city was able to finance the citywide metro system and thereby further increase land value, making it able to deliver on fruitful loaning conditions and generate a surplus revenue, without increasing the collection of tax resources. And lastly, the model was able to counter gentrification up-front by including 30% affordable and social housing as a minimum demand in land-use planning, through application of the Danish planning law, which provides local authorities the option to require 25% or more of intermunicipal land use for social and affordable housing.

Jørgen Eskemose Andersen also took note of the application of the Danish planning law as a vehicle for ensuring a socially equitable housing sector that counters the inherent skewing towards gentrification often found in urban redevelopment processes. Jørgen’s remarks noted the importance of political continuity and adoption to ensure that planned shares of social and affordable housing are actually met in re-development processes that can take cities decades to complete. Providing insight into a different innovative financial model, Arne Nielsen of Urban Power, shared his perspective based on the forthcoming redevelopment of the Holmene area, in which nine new islands and attached islets will constitute the largest land reclamation project in Scandinavia in the years to come.

Above: the Holmene area will be the largest land reclamation project in Scandinavia in the coming years.

Holmene, an area in the southwest of Copenhagen, was an industrial area for more than 50 years, until outsourcing began to bear its effects in the latter half of the 20th century. In the same period, however, the area emerged as a cluster of knowledge on district energy and heating and wastewater treatment, which serves as a pivotal point of departure for the new development. The new area, which will cover 4500km2 of land, will serve as a cluster for a projected 400 knowledge intensive companies employed in fossil-free energy production, while acting as a flood barrier securing existing and future areas, and as a natural and recreational area adding to biotope development.

The development of Holmene and construction of the islands will be financed entirely by the use and sale of surplus soil from the region’s metro and building projects, surplus soil that had otherwise posed an urgent challenge. The soil will additionally be used to create a natural protective landscape along the existing coastline, making the landscape resilient towards future flooding and providing an improved bike route.

Providing a Latin American input, Ismael del Toro Castro, the Municipal President of the local Government of Guadalajara, provided insights from several redevelopment projects in Guadalajara in which Scandinavian experience and influence had been utilized. Like many larger Scandinavian cities, the city of Guadalajara had major problems with traffic congestion and the resulting impairments to economic productivity and environmental quality in the 1960s and 1970s. As a consequence, many inner-city inhabitants sought to relocate to proximate areas of the city, thereby leaving an adverse vacuum.

Today, the City of Guadalajara has immensely decreased its share of inner-city single-vehicle automobile transportation, giving way to the Guadalajara Macrobus, a bus rapid transit (BRT) system that runs a total of 2000 buses across 27 stops and a daily ridership of 127.000 passengers. It has developed a transportation infrastructure, where bicycles can provide the “last mile” link to and from public transportation, as public bicycles are used for 17000 trips a day and a total of more than 10 million trips since their introduction. It has worked with densification in its building mass and recuperating inner city public spaces, creating multi-purpose shared public spaces that integrates commerce, recreation and residential buildings.

Above: The City of Guadalajara has successfully transformed its inner city to a flourishing centre of tourism, commerce, recreation and residences.

The City of Guadalajara provides one example in which effective collaboration with Scandinavian stakeholders have provided positive impacts on urban mobility, productivity and efficiency. Occasions like the workshop provide the IFHP with an imperative to reflect on the breadth of its heritage and practice, an opportunity to grow its international network for the benefit of knowledge sharing and network building among members and stakeholders, as well as an occasion to learn about challenges and best practices across the globe. With its global reach, the IFHP is auspiciously posed to continue its important work in facilitating the sharing of knowledge and opportunities for the benefit of cities and their inhabitants – stressing that cities are built by people for the people that inhabit them.

To inquire about IFHP and our activities please send us an email at info@ifhp.org