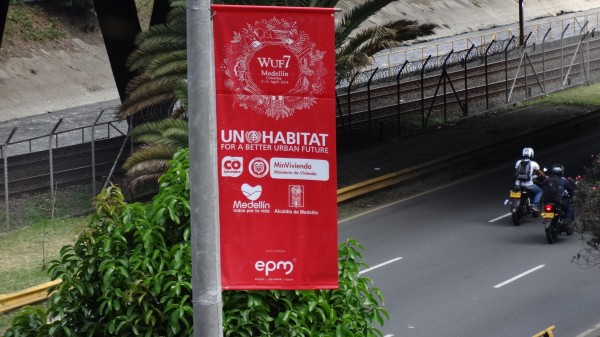 The World Urban Forum (WUF) 7 (5-11 April 2014) has provided, in a rich accumulation of discussions on global urban matters of all parts of the world.

A week of exchanges on the urban conditions and politics in different cultures, whereby locals from all over the world bring the input, is crucial for the ever so much needed continuous discussion on urban politics. The WUF provided a programme that included a wide range of global fundamental discourses about urban politics and tendencies, smaller sessions on local situations and very practical trainings, about for example tunnel safety and the use of bamboo. And just as important, a great number of new connections, projects, collaborations, with the purpose a certain contribution to better cities, emerged during this week.

So much has been discussed! Some impressions...

IFHP is now officially partner of the World Urban Campaign, which is working on the definition of the Sustainable Development Goals for the Urban Agenda, to be presented at Habitat 3.  The goals call for a new urban paradigm, going under the name: the Future we Want, the City We Need. The WUC partners came together for a day, partly to discuss the targets and how to finalize their elaboration and indicators.

The WUF 7 activities included a meeting of the Funders Forum on Sustainable Cities (FFSC). The FFSC started as a small group of philanthropic foundations for exchanging experiences, knowledge and for new collaborations, all work towards urban sustainability. As Realdania is one of the founders of FFSC, IFHP was invited. The FFSC meeting was the occasion for different foundations and other ‘urban changers’ to find each other in their ambitions. The work of different foundations was presented and impressive.

Toni Griffin, Director of the J. Max Bond Center for the Just City, presented the foundation’s work on Detroit. The city shows a huge sprawl, and as commonly known, has become an abandoned city. Griffin explores the problem of sprawl, leading to, among other things, big areas to be maintained with a low amount of taxes coming in. Therefore, services can often not be provided. In the work towards a strategic framework plan of the city, the mistrust in politics and the government revealed itself, a main challenge in the planning process to be overcome.

Nelson Saule from São Paulo, Brazil, director of the Pólis institute, promotes the ‘Urban Reform Platform’, which brings together the civil society, political actors and the academic world. Pólis focuses on capacity building, in order to give citizens the ability to deal with governments and become part of governance systems. The bridge and gap between society and the government was the main focus of both speakers, and during the entire forum an ever-returning issue.

The issue of ‘data collection’ was another topic that gained a lot of attention during this meeting and also came to light several times during the congress. At the FFSC meeting the programme Como Vámos of RED CIUDADES and the activities of Slum Dwellers International showed their data collection activities concerning informal areas. The role of data, as argument and base for policy action was emphasized, but also the complexity of data collection: How to make sure your data are trustable, comparable (especially when very diverse areas are included), definitions are applicable and neutral, etc. Actually, neutral data do not exist. Several choices, for example in the definition of ‘informal settlement’, make a big difference for the conclusions drawn on the data. Both speakers confirmed the endless and unlimited number of discussions on this definition and also the importance of the discussion, as the meaning of data is great for producing political processes.

All cities need to have a basic drainage system, based on their specific ecosystems. That is as needed as health and housing services. That might seem obvious but it is just as obvious that many cities do not have any plan on dealing with water. One of the difficulties of water management is that it is not the most imaginative issue and therefor also in politics not a very lucrative subject. The attention for drainage therefor is little, though the impacts are huge, for people’s health, safety, security etc.

From the left: Nairobi and Glasgow

A session of UN Habitat showed the importance of a new approach of water management in cities, making them ‘water sensitive cities’. Many factors were mentioned that all fit in the idea that instead of water management being a technical matter for engineers, it is a social economic matter that should involve all groups of society (communities, landscape architects, governments etc) and listen carefully to different situations; physically, economically and socially. So again the need for a different way of governance was emphasized. It was emphasized that water management solutions can never be only a matter of urban design, because of the unpredictability of water. It was also mentioned that the cities that do not have a drainage system yet have a certain advantage for being able to start from scratch.

The potential of informal areas in itself and as solution for a housing deficit has become commonly recognized. Slum upgrading therefore is one important focus of housing politics, in many countries including Brazil. Some of the difficulties in these slum upgrading projects in Brazil are the political term of four years. All politicians want inaugurations of projects in a short time. Therefor long term planning and –projects are relatively rare. This results also to the fact that good long-term participation processes are unfeasible. Another very complex facet of slum upgrading is that it often goes together with removing houses, a socially, legally, financially and spatially very complex process.

For new social housing developments in Brazil, a comprehensive national policy programme has been implemented since 2009: Minha Casa Minha Vida, My House My Life. Vast public investments are being allocated for developing high numbers of dwellings. The process of development and the projects however show many weaknesses and gain a lot of critics.

The locations are often isolated, the quality of the projects is low, private construction companies make profit of their development etc. At the same time it is being welcomed that such a comprehensive programme is being implemented. During the WUF7, an interesting initiative has been launched that create possibilities for improving the Minha Casa Minha Vida projects. The developers would get extra incentives if they meet higher standards of quality, being sharply defined in guidelines. These guidelines go from physical characteristics of the projects (considering public space, connectivity etc) to social guidelines regarding the development process, in which again the participation of residents is considered of great importance. Now it is the moment to go from a guidelines document to action.. Negotiations about this initiative are taking place with the Ministry of Cities, NGO’s, universities, the National Bank and private companies. If it goes well, it might be a new step towards higher quality of Brazilian social housing.

A legal framework for equitable cities

Cities are to provide economical and cultural development. Unfortunately we deal with many crises: widespread land and housing crises, public services crises, environmental and energy crisis, fiscal and at last political crises.  Private appropriation of benefits is growing, as the levels of taxation of land and property are low. The power and force of the real-estate market is extremely determining for just or unjust cities.
According to, amongst others, one of the speakers of WUF7 Dialogue 1 , Edesio Fernandes, all this is able to take place because of lacking legal systems. Often the laws to control land allocation and taxation do exist but is not enough; instruments, mechanism and recourses for their enforcement often lack.

Besides that do we often speak of municipalities and legal frameworks are embedded in this governmental level. However, ‘local’ more and more refers to the metropolitan level of scale.

Another issue implicitly linked to legal frameworks is informality.  As mentioned before, informal cities are more and more accepted. However, at the same time it was several times collocated that they should not be romantised: Informality leads to the lack of any rights of the ‘informal citizens’. It is a solution, however mainly for the short term.

The importance of urban legislations and their implementation is enormous, and according to E. Fernandes calls for an international government on the right of the city.

The above is a fraction of the topics discussed during the WUF, and only elaborates this fraction shortly. It might be clear how much issues have come to light. It is for sure that all urban actors; professionals, governments, NGO’s, citizens etc. have crucial roles for sustainable, healthy, happy, equitable cities. We as IFHP are one of those actors and will contribute in keeping the discussions going!